Earthball (The Yellowstone's supervolcano will destroy me)

yes...can into a lot of space

Alive and has oils (damn yanks gib mah clay back!)

is one of the most suicidal and sparsely populated countryballs

Montanaball and located in the Rocky Mountains. It is the  most suicidal stateball in USAball, home to Yellowstone national park, and is highly conservative and it's clay is square shaped along with

He exists for now... But in the next 20 years or so, Wyomingball will make the largest ash fart in history that was made by his Yellowstone part of his body.

He is always worried about Yellowstone volcano, but little does he know that it won’t erupt again for at least another 100,000 years.

Wyomingball is the least populated state in all of

Bernie World. Hold on to those precious cities...

Wyomingball is known as the cowboy state. 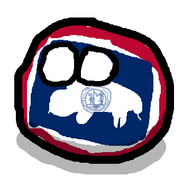 By u/GrovemeisterStudios
Add a photo to this gallery

Retrieved from "https://polandball.fandom.com/wiki/Wyomingball?oldid=1292881"
Community content is available under CC-BY-SA unless otherwise noted.