Separatist, wealthy, jealous, and proud to be the birthplace of Freddie Mercury

Murderor, and Islamophobic and the cause of all my issues

Zanzi Zanzi, Mama ooo Mama ooo
Zanzibarball is the birthplace of Freddie Mercury an autonomous countryball in Southeastern Africa. He's a part of

Tanzaniaball, but he doesn't like it. Gib independence to him!

UKball. In 1963, he gained independence from

UKball and 1 year after that he united with

Zanzibarball is of independent! Also, Freddie Mercury was born on his clay!

Drawing him is nearly simple. 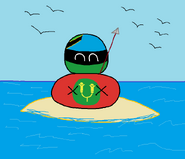 Retrieved from "https://polandball.fandom.com/wiki/Zanzibarball?oldid=1351936"
Community content is available under CC-BY-SA unless otherwise noted.