This page is about the historical kingdom in

South Africaball, not to be confused with Suluball, the historical kingdom in Borneo.

Now a province of South Africaball
The Zulu Kingdomball was a countryball. He is one of the few countryballs to defeat the

Zulu Kingdomball was born as an 8ball when Shaka Zulu conquered almost all of his neighboring countryballs In 1816. He battled boers and won they weren't actually boars though. But he was finally killed by

UKball in 1897 but not before he kicked 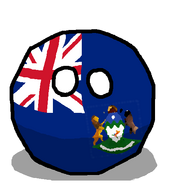 Add a photo to this gallery
Retrieved from "https://polandball.fandom.com/wiki/Zulu_Kingdomball?oldid=1294465"
Community content is available under CC-BY-SA unless otherwise noted.